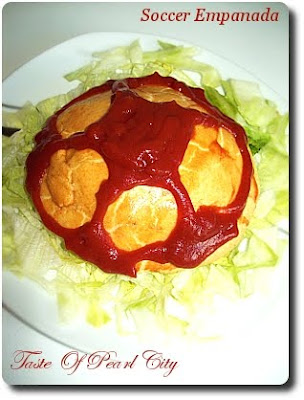 Empanada is a traditional Spanish dish. Empanada means to wrap or cover. In Spain they traditionally make it in circular form and stuff with some filling. Normally i used to make these empanadas with some meat filling today i went for some hearty vegetarian stuffing. 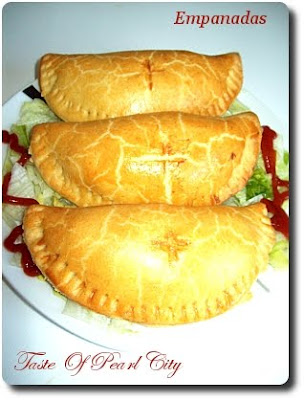 Method:
First prepare the pastry. In a large bowl add the flour, salt and cold butter cut into pieces, mix  together until it resembles like breadcrumbs. Add just enough cold water to bring the dough together. Wrap the dough in a cling film and refrigerate for 1 hour.
Meanwhile prepare the filling. Wash the cauliflower thoroughly in boiling water and cut them into small pieces.
Heat the oil in a pan, add the onions and fry it until they turn golden brown in colour. Now add all the spices except sumac. Fry it for about a minute. Add the chopped cauliflower, sweet corn and stir well to coat all the masala. Finally add salt, sumac and lemon juice, stir well, switch off the flame. 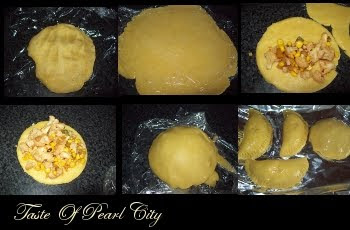 Take out the dough from the fridge, roll it out between two sheets of baking paper. Cut out 10 cm diameter circular disc out of the dough.
For making normal empanadas place the filling on one half and close it like a semicircle shape, seal the edges with a fork.
To make the soccer ball shape , place the filling on one round disc and place the other round on top of it, seal the edges.
Preheat the oven to 200 degree celsius. Place the empanadas on a baking sheet, brush it on top with egg wash. Bake it in the preheated oven for 20 to 25 minutes.
Take it out from the oven, let it cool down for a while. To give the soccer ball pattern, i just piped out some tomato ketchup on top of the round pastry.
Serve the pastry with Ketchup and salad.
This recipe goes to Champa's Bake-Off event.
This recipe goes to the event AWED Spain hosted by Priya originally started by DK of Chef in you. 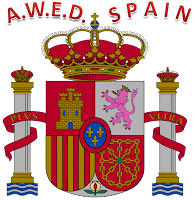 This recipe also goes to the event Soccer Mania hosted by Kitchen Samraj. 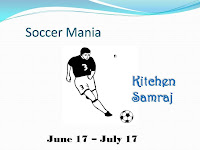 Lovely we call these patties

OMG! It must be very tasty!
looks very delicious ^^!

yes Ayeesha, it does look like soccer ball and wow, what a great recipe, love it.

this looks super yummy... i bet it would be simply out of this world :)...

delicious empanadas, sirely looks like a soccer ball dear, thanks 4 sending them to my event.

Just wondering how you manage to churn out so many delicious dishes every other day.

Wow! One recipe for so many events fantastic job! Looks so yumm, was attracted to this football design :)

You have created a nice soccer ball. The empanadas look yummy

The soccer pattern that you have given by using ketchup looks very attractive..nice for events...

Woww great looking empanadas, i wont bother to have some rite now..

How cute! Love the filling too!

ha ha thats so cute and u have done so well .. yummy filling.

These look wonderful and I must say your presentation was clever and unique :-). I really loved it. I hope you have a great day. Blessings...Mary

Looks lovely. Thanks for the entry.

I love empanadas and those look so delicious! I love the soccer empanadas!

i love empanadas...and with a spicy meat filling..brilliant..and so cute they look...