Baguette is a French type bread,it's a thin long bread.I have also suggested a recipe idea for this baguette.It can used for sandwiches or even for soups. 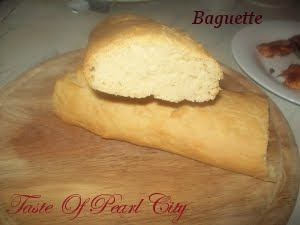 Baguette recipe
Ingredients:
Unbleached white bread flour-500 g
Dried yeast-11/2 tsp
Salt-1 tsp
Fresh clotted cream-150g
Lukewarm water-200 ml
Method:
Sift the flour,add salt,yeast,clotted cream and water knead it together to make a smooth dough.Place it in a clean bowl,cover and leave it to rise for 45 minutes or until doubled in size.
Knead the dough well and leave it to rise for another 30 minutes.Cut the dough into three equal portions.Roll each portion into a ball on a flour covered work surface and then stretch into thick lengths.
Leave to rise once again,roll back into desired length,and then place on a baking tray covered with greaseproof paper.Cover and leave the dough to rise for approximately 15 minutes.Make diagonal cuts on top of each loaf with a sharp knife.Preheat the oven to 200 degree celsius.
Bake the loaves in the preheated oven for 25 minutes.Place a bowl of hot water on the bottom of the oven,this will help to generate steam inside the oven while cooking.

Recipe idea for the baguette 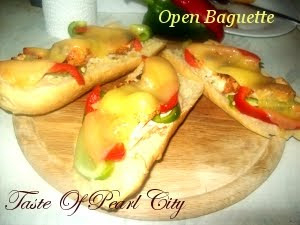 1 loaf of baguette
Cooked chicken strips-1 tbsp
Clotted cream with herbs-1 tbsp
Red pepper,yellow pepper,green pepper-1 tbsp(sliced)
Cheese slices-4 to 5
Method:
Cut the loaf into two equal halves,slice each half.Spread the clotted cream on top of each slice,then arrange the chicken,peppers and cheese.Place it under the grill until the cheese melts. Serve hot.
Posted by Umm Mymoonah at 3:49 PM