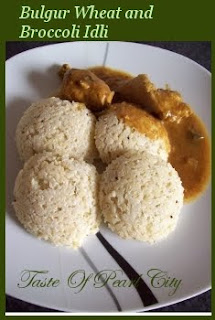 This is like rava idli but i made it with bulgar wheat since bulgar is easily available here in local stores. The last time when i tried this it was bit crumbly, still my husband loved it and he asked me to post the recipe, but this time it came out well. Please follow the instructions to get perfect results. Athough it's broccoli idli, it's not seen in the picture clearly , broccoli can be replaced with carrots also.
Ingredients:
Bulgar wheat-1 1/2 cup
Yogurt-2 1/2 cup
Broccoli grated-3/4 cup
Channa dhal-1 tsp
Cashew nut-7 to 8 nuts
Mustard seeds-1/2 tsp
Curry leaves-1 stalk
Oil-1/2 tbsp
Bicarbonate of soda-1 tsp
Salt as required
Method:
Heat the oil in a pan, add mustard seeds, curry leaves and channa dhal, then add broken cashew nuts, switch off the flame, keep the pan in that heat; add the bulgar wheat and stir well. Remove the mixture from the pan and pour it in a large bowl. .
Just before 15 minutes before making idli, take the bulgar wheat mixture, add bicarbonate of soda and yogurt mix it well.  At this stage add grated broccoli , the mixture should be  like a batter,add some more yogurt and water until it reaches to the consistency of rava idli mixture or a thick batter.
Grease the idli moulds, pour spoonfull of mixture into the idli plate. Steam it in the pressure cooker or rice cooker. These idli's take a bit long time to cook than the normal idli's. Check the idli's with a skewer if it's cooked. Once the idli looks firm on top,remove from the cooker and leave the idli's in the idli plate for 15 minutes to rest. Then carefully remove the idli's form the mould with a spoon gently without breaking. These idlis are at it's best after 30 minutes.
Serve the idli'd with sambhar, fish gravy or lamb and with chutney.

This recipe goes to the event  Green Gourmet Event by Write food
Posted by Umm Mymoonah at 12:45 AM

Helathy recipe. Thanks a lot for shring :)

Healthy and delicious idli.. looks perfect.. first time here.. thanks for the recipe.. :)

Far better than plain,love it :D

Wow! These idlis are the combo of healthiness!

Thank you all for giving me so much energy with your lovely comments:-)

New to your spot. Love the name of the blog. Love this idli too dear.

hey
Loved your recipes and would love to follow you also.very healthy recipe.

WOW !! broccoli idli sounds so healthy..And about the question on my blog...of course I didn't use any alcohol in the recipe, dear.And as I had just copy and pasted the recipe given to us by the group and it was listed on the ingredients list. And I wanted to remove the ingredients in the typing, but forgot to.

Idli itself healthy you made more healthier good

Wow, how different and innovative. Lovely and delicious !!!

Wat a beautiful and healthy version of idli..super ponga..