Ataif bil ashta and Muhallebi are Arabic desserts popular in Gulf countries. First we'll see the recipe for Ataif bil ashta and then to Muhallebi. I got these both desserts from Arabic Bites. Ataif bil ashta is something which I want to try for a long time, when I first saw in Arabic bites it was presented in a very attractive way, after that I came across this recipe in few other sites and also in You Tube. 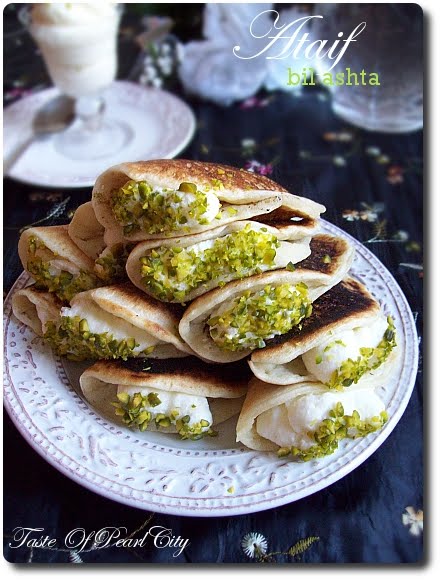 Ataif bil ashta is nothing but yeasted pancakes filled ashta and topped with nuts. Ashta is creamy filling made with milk, cornstarch and qaimar( Iraqi cream). I couldn't find this qaimar, the actual recipe suggested thick cream as the replacement for qaimar but I replaced it with ricotta  cheese which indeed tasted very good.
Makes about 20
Ingredients:
For the pancake:
Flour- 2 cups
Warm Water- 1 1/2 cups
Milk- 1 cup
Dried yeast- 3/ 4 tsp
Salt -1 tsp
Sugar- 2 tsp
For the ashta:
Milk- 1 cup
Sugar- 1 tbsp
Cornflour- 2 tsp mixed in 1 tbsp of milk
Ricotta cheese- 1 tbsp
Rosewater-1 tsp
For the topping
2 tbsp of finely chopped pistachios
To serve:
Sugar syrup, honey or maple syrup.
Method:
First prepare the ashta, mix all the ingredients in a pan, heat it in a medium to low heat. Keep stirring without burning at the bottom of the pan. The mixture will turn thick after sometime, now add the rosewater and  take it off from heat and allow it to cool completely.
Now for the pancake, mix all the pancake ingredients together in a bowl without any lumps. Cover the bowl with a cling film and let it rest for 1 hour or doubled in size.
Once the mixture is raised, heat a non stick pan, pour laddle full of batter in the pan and cook it in medium to low heat. Do not turn the pancakes. When you can see all holes on the top, and looks dry in the top, take it of from the pan, repeat with the remaining mixture.
Now fold the pancakes into half, then press the sides and seal the edges till halfway. Now it looks like a pocket in the middle.
Fill the ashta in a piping bag and pipe it into the pancake pockets. Finally dip it in the crushed pistachios and drizzle with syrup or honey.
Serve this with some Arabic tea.

Muhallebi
Muhallebi is again a Arabic dessert inspired from Arabic Bites. Muhallebi is a milk pudding made with qaimar( Iraqi cream), milk and eggs. I skipped the egg and qaimar, instead I used ricotta cheese.
I made it almost same like ashta but adding a bit more sugar. 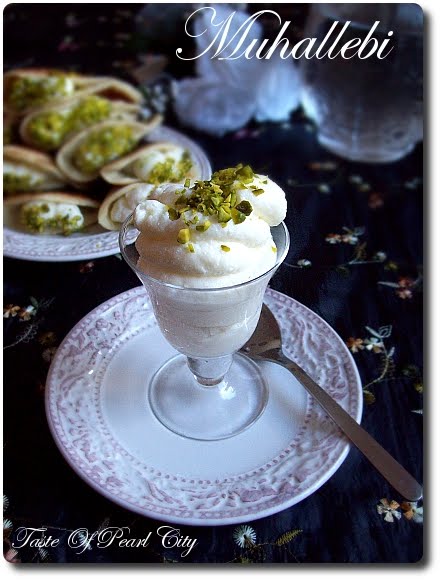 Serves 3 to 4
Ingredients:
Milk- 1 cup
Cornflour- 2 tsp mixed in 1 tbsp of milk
Ricotta cheese- 2 tbsp
Sugar- 1/2 cup
Rosewater- 1 tsp
Mixed crushed nuts to sprinkle on top
Method:
Combine all the ingredients in a pan leaving nuts and rosewater. Heat it in  a medium heat and stir constantly, when the mixture turns thick, add the rosewater and take it of from heat. Pour it in individual serving dish, sprinkle with nuts. Leave it to cool down completely  and allow it sit in the refrigerator for minimum 2 hours before serving.
This would be quite creamy in texture, to get a pudding texture, add 1 egg yolk when you are mixing all the ingredients and follow the same procedure.

These two desserts goes to AWED- Saudi Arabia hosted by Niloufer originally started by DK of Chef in you, Bookmarked Recipes-Every Tuesday by Priya Mitharwal and to the event Heart n Soul.
Also sending it to Tempt My Tummy Tuesday. 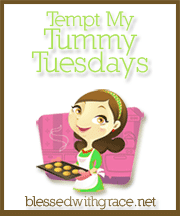 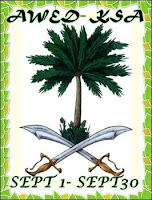 Wowww both desserts looks super cute and delicious, feel like grabbing that muhallebi..yumm!

wow that looks gorgeous !!i have qaimar at home and will try it out this weekend inshallah ! looks simple and tasty :)

absolutely new names and dishes but they look gorgeous

Wow so delicious..I'm loving all your arabic recipes..Thanks a lot for sharing.

These are completely new to me...they look awesome!

Both the desserts looks gorgeous and yummy. They are new to me thanks for sharing !!

Wow... TOtally new to me and looks so lovely. I love using rosewater in my desserts , sure my kinda of dessert . Will try it.

Nice dessert but the names r too tough to read...Really tempting...

Never heard of this dessert..first time to your blog..you have a very lovely space..

Yummy! Thanks for sharing, and stopping by my blog.

wow..bever heard or tasted it ever before but your presentation and explanation is quite encouraging to do try it once.

That looks so yummy and irresistable!

both the recipes are awesome n looks delicious dear...

First time here. Nice blog you have :o) Those Ataif look very similar to these pancakes from Morocco we call Baghrir. I like your filling and how you folded them. Makes them look festive!

They look wonderful and tempting. I am sure gonna try it.

both the desserts look exoctic ans ravishing:) too good!

This is unique and completely new to me. It sounds fantastic!

Very appetizing sweet meal! Must come again and gobble them!

both the desserts looks lovely n superb!! lovely presentation. thanks for sending to the event

It looks so light and fluffy!! I totally want to try some...delicious ,as alway!! =) Thanks for sharing it w/ hearth and soul this week, too!

I would love to eat both of these delicious looking desserts! Yum! Thanks for linking to the Hearth and soul hop!

These would be real stunners for a party, wouldn't they. Thank you so much for submitting such beautiful recipe to Hearth and Soul hop this week.

salam..
owh sis.. it looks so delicia.. love to try it one day.. insyaallah..

Umm, thanks so much for sharing these lovely recipes with the hearth and soul hop this week. I adore anything with sweet cream in them, and these look so delicate and light. Thanks! Alex@amoderatelife