Hi Everyone,
Time for another event in Taste Of Pearl City. I'm more than happy to host Cooking With Seeds event started by Priya of  Priya's Easy N Tasty Recipes. I would like to thank her for giving this opportunity. I don't think we need introduction for Priya, she is popularly known among the bloggers for using the ingredients in a very creative manner, check out her delicious and creative recipes here. 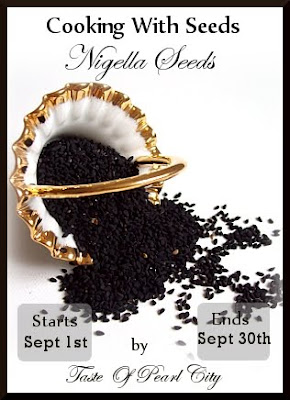 Next coming to the event, the seed for this month is Nigella Seeds which is also known as black cumin seeds, black onion seeds or kalonji seeds. You can see this seed mostly for the bread topping, this month just extend your creativity to use this seed in various other recipes as well.
Nigella seeds are known for it's medicinal purposes for centuries both as a herb or pressed into oil. It has been known to reduce the risk of illness and disease by strengthening your immune system.
In Islam  it is regarded as one of the greatest forms of healing medicines available, Prophet Mohammed(saw) said nigella seeds can heal every disease except death, as recounted in the following hadith:

[Sahih Muslim : Book 26 Kitab As-Salam, Number 5489]
Abu Huraira reported that he heard Allah's Messenger as saying: Nigella seed is a remedy for every disease except death.

Narrated Khalid bin Sa'd :We went out and Ghalib bin Abjar was accompanying us. He fell ill on the way and when we arrived at Medina he was still sick. Ibn Abi 'Atiq came to visit him and said to us, "Treat him with black cumin. Take five or seven seeds and crush them (mix the powder with oil) and drop the resulting mixture into both nostrils, for 'Aisha has narrated to me that she heard the Prophet saying, 'This black cumin is healing for all diseases except As-Sam.' 'Aisha said, 'What is As-Sam?' He said, 'Death.' " (Bukhari)

Ayeesha, great event, will surely try to whip up something :)

Inshallah will send you
check out the event in my site

http://eatvegetarianbehealthy.blogspot.com/2010/09/thanks-ton-for-award.html . Some awards for you:-)

happy hosting
thanks for sharing about seed

gr8 event ayeesha..pls count me in !

Nice event and wonderful info about the nigella seeds.Will send in my recipes.

never tried cooking with them- now I have a chance! Btw, beautiful song!

never tried cooking with nigella seeds..cant wait for the round up

me too never tried with this seeds..happy hosting!!

Happy hosting Ayeesha !! Just waiting to see all the fabulous creations you'll come up with !!Keep doing the great work !!

Great choice, dear! Nigella seeds are one of my favourite unusual tastes!

nice event dear..again u can count me in this event also..

thinking what shall I send? happy hosting !

Do you accept nigella in spice mix, such as panch phorom? I was planning to post and send a recipe, but not sure whether you would accept it :-)
Please let me know.
Thanks and have a nice day!

I second the same question as Vanessa. will you accept recipes with Panch foron (this has nigella seeds with other four seeds). please let me know so that I can update my post.

Hi Sweet Artichoke and Sayantani, Yes you can send me your entries with the mixed one as well, as long as it has nigella in it.

Ayeesha, thanks for this. I have never used this before, but I am prepared to give anything a try!