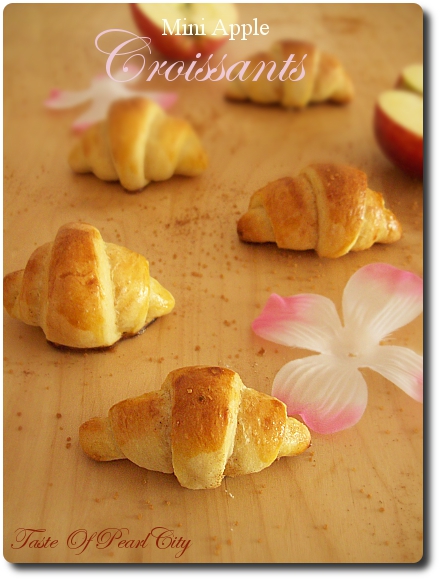 This is buttery but not flaky. After having those soft home made brioche, I really want to make use of that basic recipes and add different flavours. After looking out for few recipes I ended up in making making my own version of apple croissants, It's actually only a touch of apple flavour. It was as soft as the brioche I made earlier.
Anyway this would be great along with your breakfast, not as main. You can simply have this for tea or snack 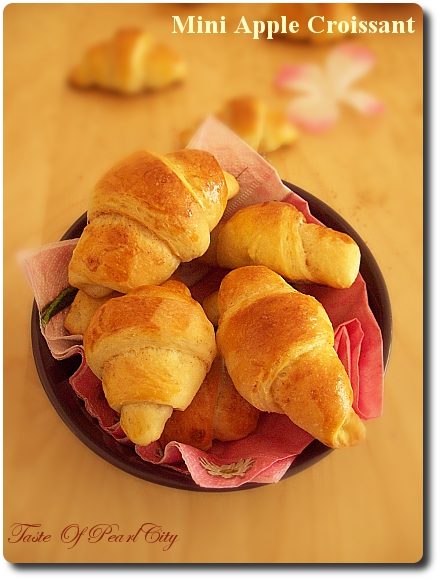 Method:
To make apple puree:
Peel, core and chop 1 apple. Add the apple along with 1/2 tbsp of honey , 1/2 tsp of cinnamon powder and 1 tbsp of water in a pan. Heat it in medium to slow heat. When the apple gets completely soft, switch off the stove. Let it cool down and puree it without adding any water.
Make the dough:
Sift the flour in a large bowl, add the salt and yeast mix well. Make a well in the center, add egg, honey, apple puree, melted butter and the milk little by little to make a smooth and elastic dough. Knead the dough with a electric mixer fitted with dough hook attachment or knead well using your hands. Place the dough in a clean and oiled bowl, cover with a cling film and allow it to rise for 1 hour or until doubled  in size.
Make the croissant:
If you are new to make croissants it might sound and looks difficult but actually it's very easy. Refer the pictures for instructions.
Once the dough has risen, knock back the air. Divide the dough into two equal halves. Roll out each half into a circle of 12 cm diameter. Cut the circle into 12 equal triangles as shown in the picture. Sprinkle with cinnamon sugar. 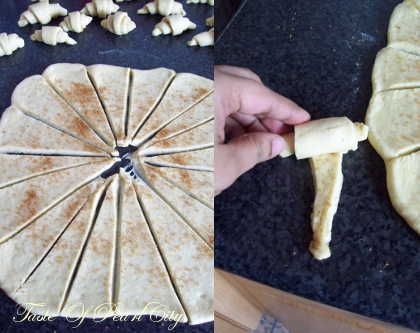 Take 1 triangle and start rolling from the wider end to form a croissant shape. Repeat with remaining dough. Place all the croissants in a baking sheet, spaced well apart. Cover loosely with a cling film and allow it to rise in a warm place for another 30 minutes until it looks well puffed up.
Meanwhile preheat the oven to 180 degree Celsius. Brush the croissants with the egg glaze and bake it in the preheated oven for 20 to 25 minutes until it looks golden brown on top.
Take it out from the oven, leave it to cool in the wire rack. Serve warm with butter and jam for breakfast or tea.

This recipe goes to  Champa's Bake-Off and Yeastspotting. It also goes to Deeba's Fruit in Baking  Monthly Mingle event started by Meeta

Oh my, they look so cute. Thanks for the entry.

Love all things mini, so cute!

Aching for a quick bite...

I LOVE croissants! Yours are perfectly made. Love how you cut the dough. Thanks for sharing.

They are so cute.Just one help can you replace egg with something else.

Cute croissants.. I love croissant. Bookmarking your recipe. will def try this. yummy..

lovely dear.. I was planning to bake something for my son's school party..now I have the idea.. I am going to make this egg less. Will let u know.perfectly made dear.lovely clicks too.

I love croissant...yours look so perfectly made just like store bought ones..nice tutorial dear..wd love to try this at home sometime, bookmaking it

They look wonderful and cute :)

the croissants are so cute. I'm sure they would have tasted great as well :)

The croissants are surely looking gorgeous....love the idea of making the shape...blessed hands...thats all i can say.
Biny

I would say..anyone who can make croissants have incredible patience..and u have done a wonderful job

Very well made dear, and small pieces are always easy to eat.
FOODELICIOUS

I would love a couple of them for the breakfast tomorrow! :-)) Look so pretty!

Looks super good and too perfect in shape. Damn tempting. Will be trying it asap :)

awe they look darn cute, u got them perfectly done!

These are just gorgeous Ayeesha... I ♥ them! I have a soft corner for mini/petit fours and these have won my heart! Thank you for sending these beauties to the Mingle.

You must have the patience of a saint to make this lovely looking morsels. What a great idea to put apple with croissant dough.

Dear Aiyesha,
You r a great baker. I came to your blog through manjulas kitchen.
i am vegeterian and dont eat egg. I want to ask that for pastry coating can i replace egg with anything else.

Hi Shina,
Thank you for visiting my blog and leaving your lovely comments, yes you can replace eggs with milk for brushing on top. It's just an idea of giving a shine on top : )

A.S.A.K ...You make things look so simple. Thanks for the pictorial instruction. It really looks cute and tempting... Take care. A.H