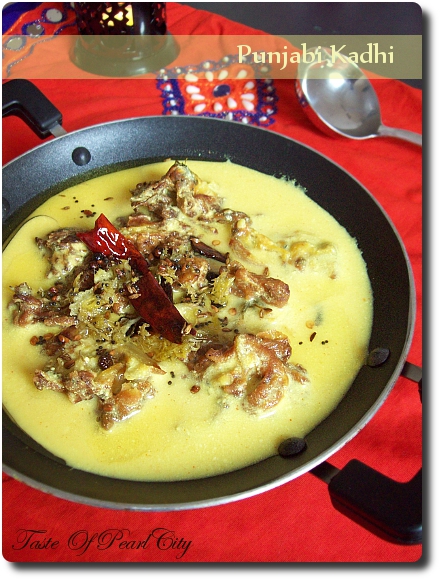 Recently I came across this recipe in so many blogs which tempted me a lot to do. Since I already bookmarked this recipe from Chef in you, I tried her version, which came out really good. DK has described this as it's almost similar to South Indian Moor Kulambu which is totally true.
Punjabi khadi is nothing but a spicy and tangy buttermilk gravy filled with crispy and spicy pakoras. A famous  vegetarian dish of Punjab.
With the pakoras in the spicy yogurt gravy was a perfect combination with rice and poppadoms. Although my husband felt that if we add chicken pakoras the taste would have doubled :)
Serves 2
Preparation Time: 15 minutes
Cooking Time: 30 minutes
Recipe adapted from DK of Chef In You

Method:
Make the pakoras:
First make the pakoras by mixing all the pakora ingredients in a bowl by adding very little water. The mixture should be similar to that of regular or baji mixture or a sticky fritters mixture.
Heat the oil in a kadai for deep frying. Check the oil is hot by dropping a small amount of mixture in the oil. If it pops up immediately and floats on top of the oil, then the temperature of the oil is right.
Drop small teaspoonful of mixture in the oil and deep fry it until golden brown. Drain from the oil and set aside.
Heat some water in a pan, when the water boils, switch it off. Add the pakoras in the boiling water, take it out after 1 minute. Squeeze the water gently without crumbling the pakoras.
Make the gravy:
To make the gravy, mix all the gravy ingredients in bowl with 250 ml of water. It should resemble like a thin buttermilk. Add the mixture to the pan and bring it to heat in a medium flame. Stir continuously, when it gets heated up and just in the boiling point take it off from heat. Add the pakoras to the gravy.
Heat oil in a pan, add all the seasoning ingredients, when the mustard seeds start spluttering and the red chillies turn brown, pour the seasoning on top of the gravy.
Serve with plain rice a and poppadoms.

This recipe goes to Tried and Tasted hosted by Priya's Easy N Tasty Recipes , organized by Laksmi of Kitchen Chronicles, Flavours Of Punjab hosted by Foodelicious started by Nayna and to Bookmarked Recipes by Priya and Aipi. 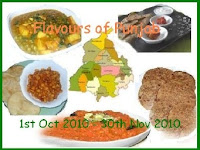 Ahh..my all time favorite.Looks so perfect, all I need is some hot steamed rice n your yummy punjabi kadhi n I am all set..:)
Thanks a lot for linking this to bookmarked event.

So tempting and delicious...

yea i too have seen many similar recipes around, delicious and well presented :)

U makes me hungry again, just had my dinner and ur kadi makes me drool rite now..Thanks for sending to T&T Ayeesha..

An award is waiting for you at my blog...plz stop by to collect your award..

i know of more kozhambu.. i haven't tried adding pakoras to it.. will def try this version.. interesting. dish..

Both my hubby and I are big fans of kadhi... and this punjabi kadhi looks fabulous.

never tried kadhi before... u have tempted me... soon will give it a try.. nice click too dear.

Great looking bread dear.Loved the very look of it.

lovely lovely...You have a surprise in my blog...

Hi! You have received an award. Please visit my site and collect it. Best Wishes.

yummy kadhi.. the tadka makes it so inviting :)

I am happy to find you again. I changed computers and lost all my information. I have not had time to track everyone down but I found you.

You have much valuable infomation and I am off to catch up.

Thank you everyone for your lovely comments.

A festive gift for you on My blog :-)

I am not a big fan of kadhi but this looks so yum..Lovely pic..

i love this..looks so perfect and yummy!!