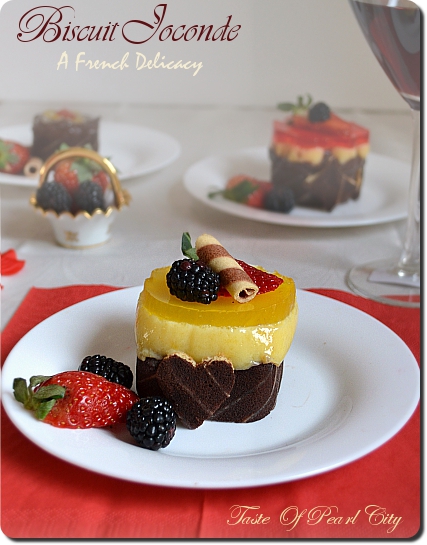 This month our challenge is given to us by Aesthroshe, she challenged us to make Biscuit Joconde, imprime/entremet. Imprime is a French baking term.  Joconde is nothing but a thin flexible cake made with different patterns.  This is used in desserts as a base or covering.  This flexible cake easily fits in the mould and it retains it's texture even after chilling. 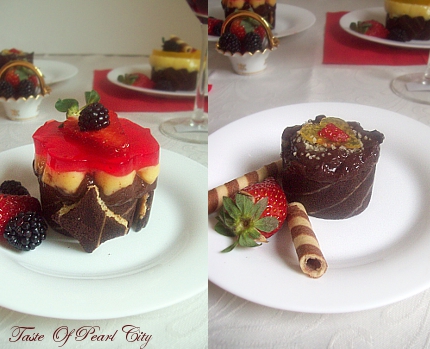 The moment I saw this as a challenge for this month in Daring Baker's forum, it was like a wow for me and I planned so much for  that.  Guess what !  I didn't make anything according to the plan.  I was actually planning for some nice filling like blackberry mousse, mango mousse, cheesecake, cold souffle etc...
Since I left till the last moment, I mean very last minute, I made it only yesterday night.  So I ended up making in a simply chocolate mousse, topped with readymade custard mix and jelly.  The custard was bit wobbly and it was quite hard to hold it's shape in the mould I made.  However the joconde was absolutely amazing.  I have decided to make this for all my cold dessert as a base.  I have to say millions of thanks for Aesthroshe for this amazing recipe which she has given.

Method:
Prepare the mousse:
Melt the chocolate and water in saucepan over low heat until it melts.  Remove from heat beat in the butter.  Add the egg yolks to the chocolate mixture and beat well.  Meanwhile beat the egg whites in a clean bowl until soft peaks form, slowly sprinkle the sugar little by little and continue beating until stiff peaks form.
In another bowl beat the cream until soft peaks form.
Fold in the cream and egg white into the chocolate mixture little by little until well combined. Set aside the mousse separately.
Prepare the joconde sponge:
Beat the egg whites and  granulated sugar in aclean bowl until it looks firm and glossy. Set it aside.  Sift the flour, ground almonds, icing sugar in a large bowl.  Slowly start adding the eggs and beat it together. Fold in one third of the egg white into the flour mixture. Gently fold in the remaining egg white until well combined.  Finally fold in the melted butter. Keep this separately.
Prepare the patterned joconde paste:
Beat the butter and sugar until it looks light and fluffy.  Slowly add the egg white and continue beating until well combined.  Fold in the sifted flour and cocoa.
Prepare the pattern:
Spread a thin layer of the joconde  paste in a silicon mat.  Use a ruler to drawn inclined lines on it.  Place the silicon mat on a upside down baking sheet and slide it into the freezer. Let it sit in the freezer for approximately 15 minutes until it looks firm. Preheat the oven to 250 degree Celsius.  Quickly pour the joconde sponge on top of the pattern.  Spread it evenly.  Bake it in the preheated oven for 15 minutes until springs back.
Take the sponge outside and immediately invert it over a sheet of baking paper sprinkled with icing sugar.
Prepare the moulds:
Take the moulds of your size and shape which you desire.  Grease the inside of the moulds with butter and line with cling film or baking parchment.  Baking parchment paper holds the filling well.
Cut a strip from the sponge such that it fits your mould.  Gently place it inside the mould and press it in the edges.
Spoon the mousse layer inside the mould.  Then prepare the custard filling( according to your package instructions) and pour it on top of the mousse. Allow it to set.  then prepare the jelly according to package instructions and pour it on top to set.
That's it you have your finished dessert, you can serve it with some fresh selection of fruits.

Wow! This's such a treat. Totally irresistible! Ayeesha, you are one talented person!!

Looks pretty.I'm sure it has a lot of work involved...

Looks so so beautiful.

Your presentation is simply superb....I just can't take my eyes off those photos...Kudos...
Reva

Looks so beautiful and yummy..

you are the best.. awesome presentation and looks yummy!

I have to tell you - it certainly doesn't LOOK like it was made at the last minute! That really looks great.

HEy Ayeesha.. is this the messy work you said :(.. oh my you have done beautifully dear.. lovely one with great filling.

Great work! Your simple fillings sound like a great combination, and why mess with delicious?! I love your little hearts, too. Thank you!

Wish i could have them...look fantastic!

pretty looking dessert on the plate! :)u really are an expert baker!
hadnt we visited our places each other? I think I have, dont remember whther I had placed commens when i visited!
I love your space too :) esp the clicks and the recipe collection!

Your entremets presentation is fantastic.
I like the idea of having a chocolate mousse filling: simple but soooo delicious!
The first picture is absolutely gorgeous !

chef and her kitchen said...

Wow looks so delicious...loved the pattern too

it looks gorgeous ! boy, u have tons of patience :) very well presented too :)

Looks like dessert plates arranged in a five-star buffet.... My heart craves to grab everything.... :-)
You have astounding patience to arrange these things...

WOW your lovely entremet are so so cute and your photography is awesome I just LOVE your enthusiasm for this challenge. Your patterns are so pretty well done on this challenge.

Cheers from Audax in Sydney Australia.

Beautiful job on this challenge!

but wow the entire set up looks so delish!

Wow! Awesome and drooling over our pictures!

thats a perfect job done.. hats off to u dear...looks so yummy...

Oh these one looks so gorgeous :)

Your entremet looks really good. Like the nice heart cut-out you added in the first pic.

Wow it looks great yaar.and you have done excellent photography :)
which camera do you use for photography and are you staisfied with it. help me I am looking for a good camera.

they entry is perfect!