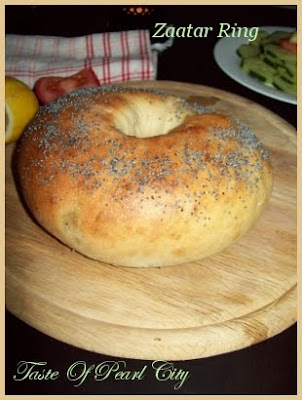 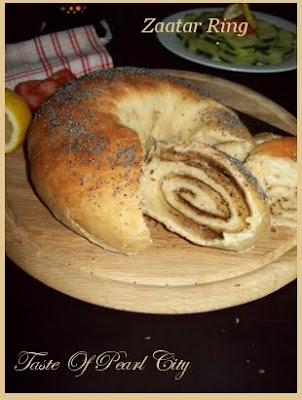 One of  our family friend from UK gave us a big packet of this Zaatar mix which i rarely use in bread, it's been left out in my store cupboard for a long long time so i decided to finish this by making some bread.
Recipe adapted from Arabic Bites.
Ingredients:
Dough:
White Bread Flour-300 gm
Dried yeast-1 tsp
Olive oil-1/2 tbsp
Warm water-120 ml
Salt-1/2 tsp
Sugar-1 tsp
For the filling:
Zaatar spice mix- 2 tbsp
Olive oil-1/2 tbsp
For the topping:( optional)
Poppy seeds-1/2 tbsp
Milk-1 tbsp
Method:
Mix together flour, yeast, sugar ,oil and salt in a large bowl, add warm water and knead it together to make a smooth dough. Place the dough in a clean, oiled bowl, cover it with a cling film and allow it to rise in a warm place for 1 hour or until doubled in size. 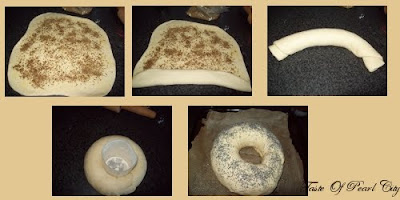 When the dough has risen, punch the air back, roll it out into a rectangle of 30cm. Drizzle with olive oil and sprinkle with zaatar spice mix. Roll the rectangle like a swiss roll. Join the two ends to form a ring. Place a small cup in the middle of the ring, cover it and leave it in a warm place for 30 minutes.
Preheat the oven to 200 degree celsius. Take the ring, remove the cup from the middle, brush the top of the bread with milk and sprinkle with poppy seeds. Bake it in the preheated oven for 30 to 40 minutes or until  brown on top.
Serve the bread for breakfast with eggs or as a bruch , lunch or dinner with curries and salad. 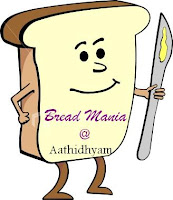 oooh that looks yum..and so do the peach and vanilla slices:)

Wow zaatar ring, looks terrible and prefect, i have seen this Zaatar mix in Arabic stores, Wonferful bread..Dear Umm, i am very happy to see ur comment for hosting CWS, Niloufer of Kitchen samraj wanted to host in july, if u dont mind i'll reserve u for September, as i could nt host the cws event on september, hope u will understand and i'll be happy if u wish to host on September..Wat did u say?, waiting for ur reply..

Ring! I love rings! I'd bite the whole piece off the plate! Looks fantastic!!

I have heard of Zaatar spice, haven't used it, got to buy some. Bread looks delicious, yummy swirls.

That looks amazing...never heard of this b4..

U prove u live in Germany Moon :). The bake looks perfect.

I m drooling here for ur zaatar ring..Looks perfect dear..

What a gorgeous bread! I loved those swirls :-)

Thanks for following my blog!!

This creation of yours look so interesting and yummy!!

You are brilliant at baking (:

Hey, lovely recipes you have got here....will surely visit again and try out some of them.
Zatar stuffed in the bun...is awesome.

I just discovered your blog and O.M.G, I love it!! :)
Thank you for taking the time to post such incredible recipes. We all appreciate it :)

This bread looks wonderful and tasty.

Thank you so much everyone for visiting my blog and leaving your lovely comments, it means so much to me:-)

looks delcious..lovely bread...heard abt the spice ,but never seen in american grocery stores...pls tel me which arabic store can i find this...sure wil try and let u knw....

Thanks for the entry, but you need to put the link to the post on Arabic Bites that carries the inspiring recipe, not just to the home page. I can't find this recipe on Arabic Bites. Please make the edit, and let me know, then I will be sure to add your entry to the round up. Thanks.

Thanks for making the edits- both your entries have been included in the round up.

Ayeesha, is ur zaatar spice all finished or is still remaining ? i couldnt find it in the shops here....would love to get it from u if its still there