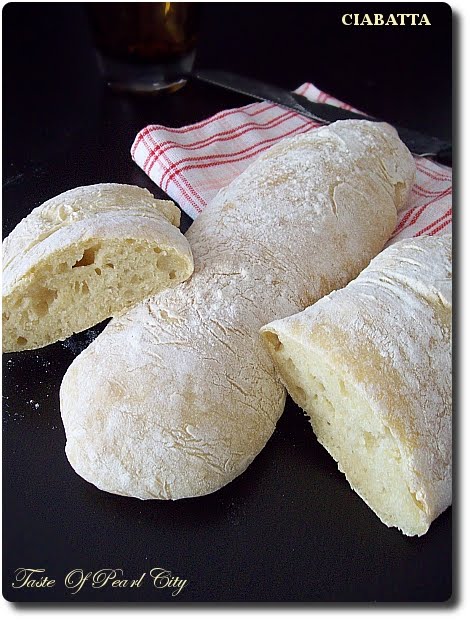 After trying out Sourdough bread, this time i went for the famous Italian bread 'Ciabatta'.
Italian bread has had something of a renaissance in the past few years and rightly so. Italian breads are a delight, delicious served with pasta, fish, meats and poultry as well as cheese. Any Italian baker will tell you there are thousands of Italian bread. This could actually be true, should anyone ever try to count!
Some of the best known loaves ciabatta and pagnotta are national bread available everywhere. Olive oil was frequently added not only for flavour, but to add extra nourishment and to help the keeping qualities of the loaf. Nowadays these rustic loaves are still made using olive oil. They may be yeast leavened but originally would have been using a natural leaven. Small bakeries, especially those in the south of Italy, still produce these loaves for their loyal customers, made in the traditional way from time- honoured recipes.
Like the French baguette, ciabatta is a relatively new shape of bread. It is normally a white loaf made using a sponge dough method- flour, yeast and water are fermented for upto 24 hours before being incorporated into the rest of the dough. Another particular feature of ciabatta, making it a tricky bread to bake at home is the soft consistency of the dough. It has a minimum of 75 percent of water and oil.
The crumb of the bread is holey and chewy. The flavour and texture of the bread makes it undeniably one of the world's favourite bread.
The dough of the bread is extremely wet, do not tempt to add more flour, it's mean to be that way.
Recipe adapted from the book BREAD by Christine Ingram and Jennie Shapter.
Ingredients:
For The Biga
White bread flour- 175 g
Warm water- 200 ml
Dried yeast- 1/2 tsp
For The Ciabatta Dough
White Bread flour-325 g plus extra for dusting
Warm water- 200 ml
Olive oil- 2 tbsp
Milk- 2 tbsp
Salt- 1 tsp
Sugar- 1/2 tsp
Dried yeast- 1/4 tsp
Method:
Start preparing the Biga for the dough previous day you want to make the bread. Mix together all the biga ingredients in a clean, large bowl to make it into a dough. Cover the bowl with a cling film and leave it to rise for 12 hours. The dough will be well risen and starting to collapse. Now add the ciabatta dough ingredients to the Biga and knead it together to make it into a dough. Knead the dough using a electric mixer or spatula as it's quite sticky to handle with . Transfer the dough to a large clean bowl, cover with a cling film and allow it to rise for 1 hour.
The dough should have been tripled in size. Do not knock the air back. 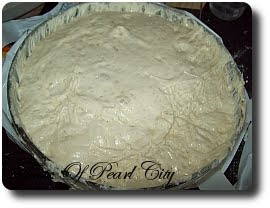 Transfer the dough into the prepared baking sheet in two portion. 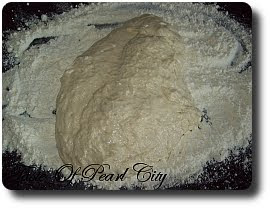 Stretch and pull apart to form a rectangle, sprinkle with more flour on top.
Leave the tray uncovered for 20 to 25 minutes.
Meanwhile preheat the oven to 220 degree celsius. Bake the breads in the preheated oven for 25 to 30 minutes or until it sounds hollow. Transfer the bread to a wire rack to cool.
Serve this bread with soup or salad.
This bread is been Yeast spotted.
This recipe also goes to Champa's Bake-Off event.
This recipe goes to BBD#32 Italian Breads hosted by Family, Food and Other Things originally started by Zorra.
Posted by Umm Mymoonah at 4:18 PM

I was looking for a good Ciabatta bread recipe and u have it dear.. I have book marked it. will soon try and let u know.. Looks very good...Yumm..

Great creation Umm..I always saw this bread in stores but never ever found a good recipe for it.. me being a bread lover will definitely try your recipe and let you know.

Homemade bread is my favorite. Yours looks so good; I can almost smell the freshness. Looking forward to tasting this:)

ciabatta is simply superb ...wonderful recipe very nice explanation which make easy to try ....i feel like to try immediately...thanks for sharing dear

hi,
its really gud.I just tried it and served my family.They enjoyed a lot and of course i toooo.May ALLAH shower his blessings upon u.And finally I thanku 4 making my family happy in that evening.

Thats a fantastic bread Umm, looks very prefect and feel like having some..

That ciabatta looks perfect! Wish I could eat that entire thing right now.

ciabatta sandwiches are the best...have never made my own though..shud give it a shot..

I love ciabatta breads and yours looks absolutely delicious!

I am glad you are getting into yeast baking. Thanks for the entry.

Thank you everyone for visiting my blog and leaving your valuable comments.
Thank you Heba for trying out my recipe and i'm really gald to that you and your family enjoyed it, it really makes me feel happy.

The bread looks so wonderful. Loved the preparation.

Hi Umm, regarding ur q"n for sprouts, i usually soak dry beans for overnite and the next day i'll strain the water with a strainer, immediately i'll take them in a bowl arranged with a muslin cloth..tie the ends and conserve them fridge (usually i'll keep them in the last rack where its usually be dark) after a day u can see the sprouts..

or else take a jar with the soaked and drained beans cover with a muslin cloth, dont close the jar with a lid, keep this jar in a dark place in room temperature, u can see the sprouts after a day or two..Hope this helps..do try and let me know dear..

The ciabatta looks delicious. I have made it before but only by using the shop ready mix stuff. I will book mark your recipe to try out.