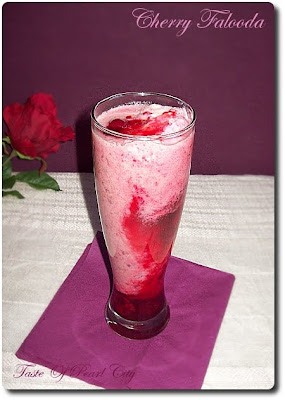 Falooda is a popular bevarage in Asia, it is also a cooling summer dessert. Falooda is normally made with falooda sev, tapioca seeds and flavoured with rose syrup which gives it a rich flavour. However there is also a Persian version of falooda which is completely different.
In this recipe i have used sago, vermicilli and flavoured with rose water, use your creativity and imagination to have enormorous flavour for this falooda.
Serves 2
Ingredients:
For the jelly:
Frozen cherry- 1 tbsp
Vegetarian or halal jelly- 1 tbsp
For the milk
Whole milk- 1/2 litre
Sugar- 5 tbsp
Cherry- 1 tbsp
Sago- 1 tbsp
Vermicilli-1 tbsp
Rose water- 1 tsp
Method:
First prepare the jelly by adding the cherries and jelly powder in a bowl. Boil about 1/2 cup of water and add it to the jelly powder and cherries, mix it well. Allow it to set in room temperature.
Now blend the cherries with little bit of milk and keep it separately. Soak the sago in water for 15 minutes( soaking the sago will reduce cooking time). Boil the milk along with sago, vermicilli and sugar. Keep stirring and cook until the sago and vermicilli are completely cooked. Finally add the rosewater and switch off the flame. Let it cool down for while. After it gets cooled down a bit add the pureed cherry and mix well. When it's completely cooled, refrigerate it until you serve.
To serve in a tall serving glass add the jelly mixture at the bottom of the glass and top it up with milk. You can also use a scoop of ice cream on top.
This recipe goes to the event Cooking With Seeds- Sago hosted by Kitchen Samraj originally started by Priya's Easy and Tasty Recipes. 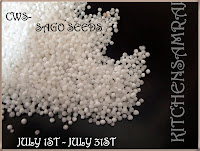 this looks so inviting!!!!!!. will try this out. thanks for dropping by my blog. following you

That is a beautiful mix of colors.

Please pass on that glass to me!!

cherry falooda looks awesome...i never prepared at home...but seeing urs i feel i can do it...thanks for this wonderfull recipe

Splendid..thanks for reminding about falooda :-)

I have never had "Falooda"...but I am very sure that I would like it as it has my favourite fruit: Cherry!

Wow looks delicious. I haven't had falooda for a long time!! I must make some soon.

That looks so delicious! I love cherries!

I can't wait to see that Ramadan roundup!

hey!! never made falooda with cherry, sounds n looks yummy!! thank u 4 sending to my event

wowww you hav sooo many ice cream recipes here ....simply killing me